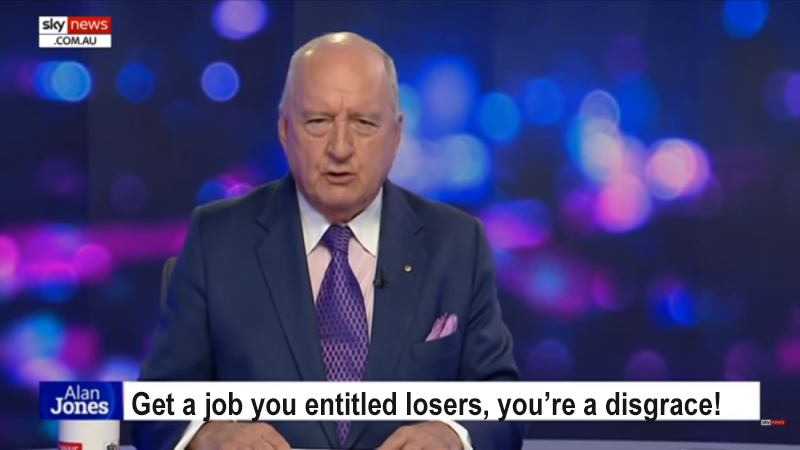 Disgraced former radio host turned disgraced former tv host, Alan Jones has begun preparations for his final appearance on Sky News after the network decided not to renew his contract following low ratings. Reportedly Jones plans to spend his final episode going over all his greatest shit-takes, especially one final rant on ‘lazy unemployed people’ like himself.

“It comes with great disappointment that I have to make this announcement,” he said, “but the cancel culture brigade at Sky News have silenced me. It is sad that in this day and age someone like me can be fired from a tv show just because I was getting paid millions to make a show almost no one watched on tv, despite my American Qanon friends tuning in to my videos on YouTube.”

“But the show must go on and it shall. First of all, I want to talk about these lazy unemployed people too inept to keep a job. They continue to be the scourge of humanity and I think we should let them starve to death. They are so entitled but I believe that society doesn’t need them breathing my air!”

A representative for Sky News has put out a statement urging fans to remember that his firing was only to do with his tv ratings and not his racism, islamophobia, sexism, anti-vax conspiracies or even his history of inciting a race riot, reminding fans that there are many other rich bigots still at the network.

Jones ended the show by reassuring viewers that he does have plans for the future, however for now he wants to spend some time reconnecting with his passions and interests by spending more time with his love letters to students.