Entertainment
CHASER FACT-CHECK: Yes, a show that was axed twice already would be axed today
March 22, 2021 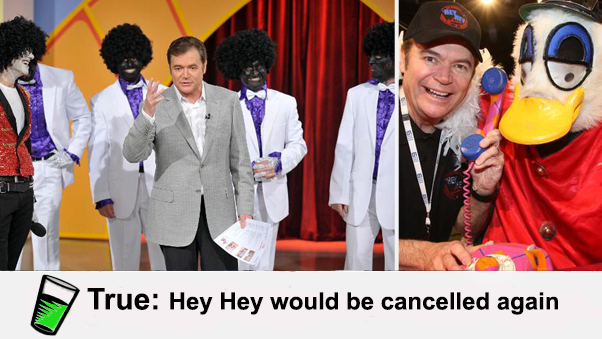 Former host of axed television program Hey Hey it’s Saturday, Daryl Somers has come under fire for his claim that the show would be ‘axed’ if it was still airing today and that “You probably could not get away with half the stuff you could on Hey Hey now because of the political correctness and the cancel culture,” a claim he made while doing press for his upcoming show and streaming service.

Our fact-checking team have worked tirelessly to test the claim and have come to the conclusion that the show that was cancelled in the 90s, received international backlash in the naughties, and was once again cancelled in 2010 would probably be axed in 2021 as well. Which means in a shocking turn of events, Daryl Somers was actually on the right side of history for once through absolutely no fault of his own. Big accidental win for Daryl!

Yes, it turns out the guy who declared himself a legend this January 25th, was bang on the money. A show that audiences haven’t been interested in for over 40 years, full of racism, homophobia, sexism, ableism and every other way to punch down, would in fact probably not get the necessary viewership to stay a float in this ‘tricky time’ when black face is considered a no-no and people who aren’t rich-cis-straight-white-non-disabled-men are also allowed to have opinions. Tough times for lazy assholes all around the country.

Our fact-checkers also tested the claim that “It was always about having fun; good, clean fun, and we don’t have a show like that, that is reflecting the fun any more” and found it to be completely bullshit unless by ‘good, clean fun’ he meant ‘discriminatory bullying that borders on the line of fucking hate speech’. And while not many shows are as blatant with their discrimination that sort of alleged ‘fun’ can still be seen throughout Australian media just with slightly less shoe polish.