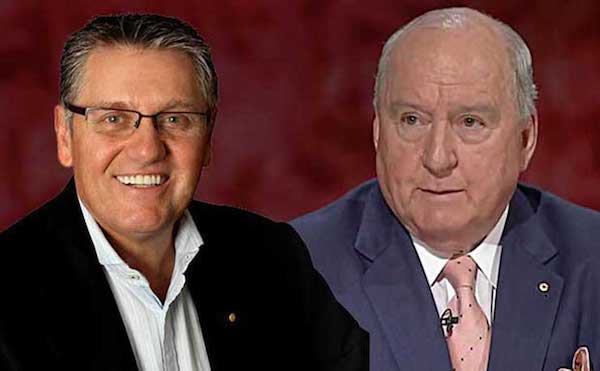 Ray Hadley has said that he fully supports Alan Jones in his view that coronavirus does not exist, and has coincidentally reminded 2GB management that he’s younger, fitter, and an ideal successor were the unthinkable to happen.

The top-rating professional shouter Alan Jones has claimed repeatedly that coronavirus is “the global warming of heath” while broadcasting from a remote studio on his property in rural NSW to protect himself from coronavirus.

But Mr Hadley has reportedly told Jones he 100% agrees with Jones, and that Jones has nothing to worry about mixing in mass gatherings.

Jones has promised to help his beloved listeners through this crisis by denying that the virus exists right until the moment they asphyxiate from lack of oxygen caused by the acute respiratory failure that is characteristic of the non-existent pathogen.

“I will go on helping my devoted audience feel safe from this ridiculous lie, right until their dying breath,” he said. “I won’t wash my hands of my listeners – in fact, I’m not washing my hands at all.”

Health experts have demanded that Jones retract his claim, but had to concede defeat when the broadcaster also claimed that his critics were also a hoax. “Once he refused to acknowledge that there really was a chief medical officer, it was checkmate,” Professor Brendan Murphy said. “Jones’ strategy is so effective that we are starting a clinical trial of denial’s effectiveness against coronavirus immediately.”

It’s understood that Jones’ bosses’ main concern is that coronavirus will remove the shock jock from his long-held number one spot by annihilating his audience, giving his ABC rivals the top breakfast show. “I also don’t believe that the ABC exists,” Jones said. “Although the way their budget is looking, that belief actually will be true soon enough.”