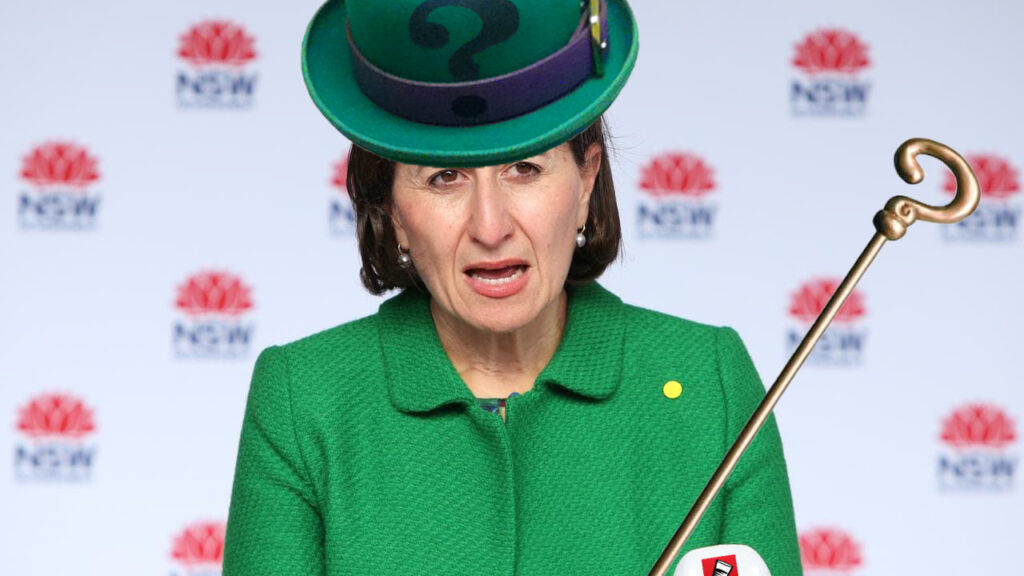 NSW Premier Gladys Berejiklian has gone viral after doing an incredible impression of the Riddler from Batman during her latest covid announcement. The impression has left people in awe as information comes flying out that is clearly related in some sort of code, as many try to decipher exactly what it is she is trying to say in her own take on the Riddler’s famous riddles.

“A city is forced to stay home but it is not in lockdown, what is it in?”

“There were 11 until 8pm, and then 17 before this morning, but all up only 12 today and only 6 from yesterday; how many cases are there?”

“20 can visit here until 4 and then must leave, unless 5 live here then they may stay until reports come in at 8; where am I?

“To the east people are stuck, in the west they are free, unless they want to go to the east, then they stay stuck in the west; how can this be?

“If Kate Middleton is emerald, what needs to change to bring a great plague upon this land?”

“I leave these for you to solve Sydney while I make a plan, as we fight my party’s greatest foe, the party representing Batman!”

Many around the nation have praised Berejiklian for what many perceive to be some sort of performance art, with one Sydney resident saying they would be genuinely concerned if Sydney were ever in a situation where what she was saying was real and important.