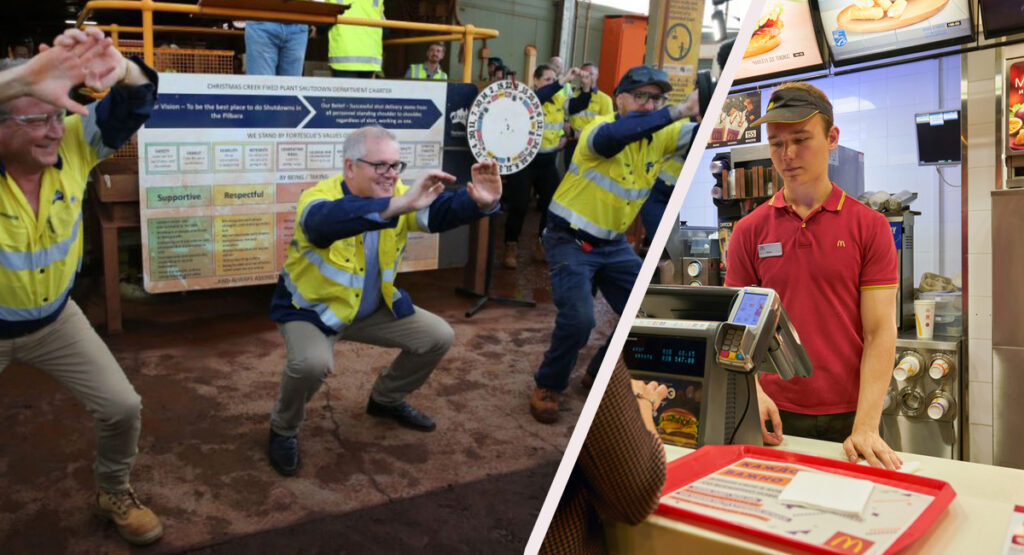 Authorities have released a mental health warning after disturbing images emerged of prime minister who is so full of shit it was once overflowing, Scott Morrison after took his ‘hey no look over here’ method of leadership during a crisis to a new low, by dancing around in a high vis shirt to the song ‘Working Class Man’. Experts are extremely worried about employees at Engadine McDonalds in particular after multiple employees suffered terrible flashbacks triggered by the horrific dancing.

“Oh god, not again,” said one employee who instinctively grabbed a mop out of anxiety, “please no. I don’t want to have to deal with any more shit. Oh wait he isn’t here, right yeah. I think I am going to need a few minutes. The last thing anyone has the energy to deal with is Scott Morrison’s shit, but for us it is a very literal concern.”

“Here we consider him our Vietnam. Whether you worked here at the time or not, you are scared, the fear lives on through generations of Maccas employees. Seeing him dance like that has me shaken up. He was dancing like no-one was watching, for a publicity stunt, in high-vis. Who would want Australia to see moves like that. It doesn’t make sense unless it was an attempt to intentionally trigger us, I wouldn’t put it past him. It even feels like I can already smell the shit.”

Reports say a wellness check has also begun for all members of 101 Doll Squadron who performed recently the recent launch of a naval vessel with concerns that the group that have been attacked by the media and members of parliament for doing a dance-hall routine they were hired to do, may find the footage of the dancing deeply offensive both on a professional level as dancers and as people who can see things. This after some onlookers described the dancing as ‘inappropriate’ and ‘an affront to basic human decency’, and one ABC editor was hospitalised after he begun editing the footage into a twerking compilation.

Experts have called for any Australians disturbed by the footage to seek professional help with any issues caused by Morrison’s dancing which many consider ‘bad even for a daggy dad’.