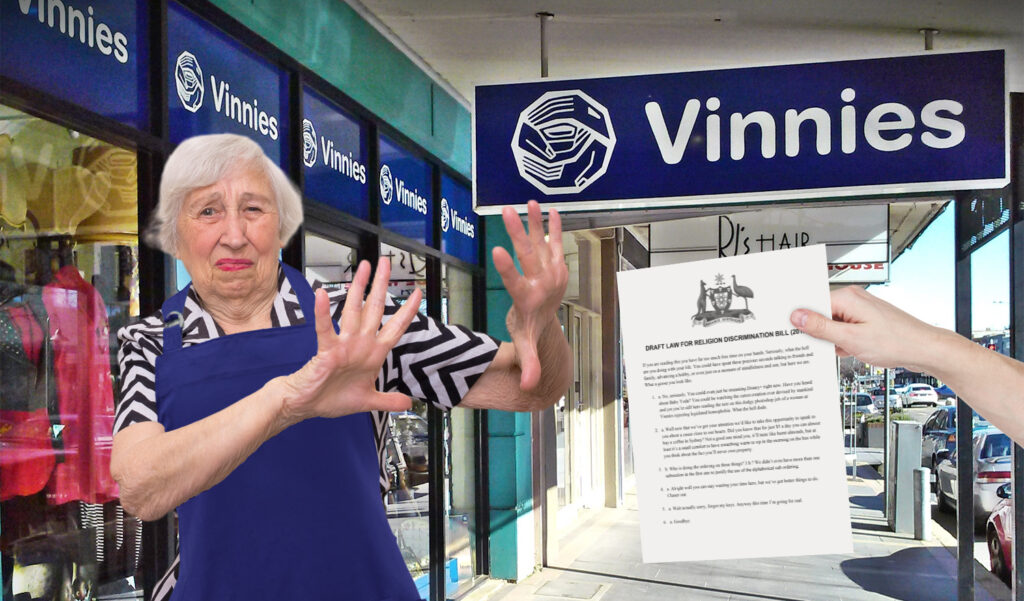 Beloved Australian op-shop and leading vendor of 80s powersuits St Vincent “Vinnies” De Paul has today rejected an offering for the first time in the company’s history, after it rejected the federal government proposed laws to allow the company to only hire Catholics at its various stores.

“Today is a great day for Vinnies,” announced Attourney-General Christian Porter yesterday to the surprise of Vinnies, “No longer will that goodwill op-shop be forced to hire evil gay people with their agenda to volunteer in the charity second-hand furniture market. You’re welcome guys.”

However, Vinnies have expressed surprise at the news, stating they never even asked for these laws, given they are far too busy providing clothing, shelter, and food to the poor. “What we actually asked for was that the government try to address the growing homelessness problem due to the lack of affordable housing.” said a representative. “We had a whole press campaign about it. How in the world they somehow heard that as ‘let us ban the gays’ we’ll never know.”

Offered the bill alongside a pile of second hand underwear, Vinnies said that there are limits to the kinds of disgusting things they would accept, before happily bringing the underwear inside. “Jesus Christ, get that thing away from us,” said the head of the organisation when offered the bill by attorney-general Christian Porter, “Gross, gross, gross. I wouldn’t touch that with a ten foot pole.”