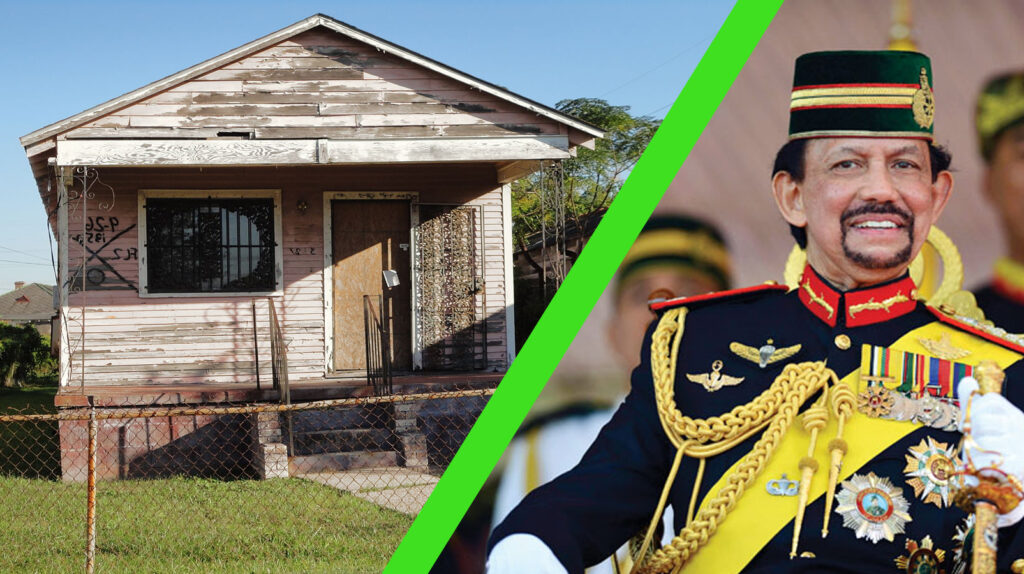 Doomsday predictors for the Sydney housing market were once again proven wrong today, as the latest in a string of wealthy foreign investors poured multiple millions of dollars into snapping up one of Australia’s most desirable pieces of real estate. Selling for just over 8.5 million dollars plus stamp duty, this Western Sydney bedshare in a 1950’s project home sold for 10% over its estimated market value, after first time Sydney home buyer the Sultan of Brunei beat out a local young family with a record breaking bid.

Speaking with the press via his representative L.J. Hooker, the Sultan is said to have taken an interest in the property after hearing that Australian real-estate was becoming all the rage with the world’s billionaires. “Sure Faberge eggs and gilded palaces are nice,” said Mr Hooker, “but every billionaire has a few of those these days. If anything they’re not even a status symbol anymore. But a small fibro house on the outskirts of Sydney’s metropolitan ring, now that’s something that really says to the world ‘I’ve got money to burn’. Not even the Queen of England can afford that level of luxury!”

The purchase has been taken up by the Turnbull government as just the latest indicator that the Australian property market is in healthy shape and not in any way in a bubble. “When young people today complain about there not being any houses to buy, I think they really have to take a long hard look at themselves,” said government representative Peter Dutton. “I mean, come on. Just about every day we hear another story in the press about this Chinese billionaire or that son of a media mogul purchasing their fifth, sixth or seventh property. Are we really supposed to believe these people are able to own that many houses and at the same time there’s some kind of shortage? Pull the other one.”

“I mean, if there really was a bubble do you think we’d have government ministers like Sussan Ley just popping off to buy an apartment on a whim while on holidays. Do you think I’d own six properties, or the Prime Minister would own twenty four if there was some kind of ‘property bubble’ happening? No that would mean we were either being wilfully blind or incompetent. And I think we all know this government would never be wilfully blind about something that would make them a short term profit.”

A spokesman for Mr Dutton later corrected his statement to clarify that the government is also not incompetent.