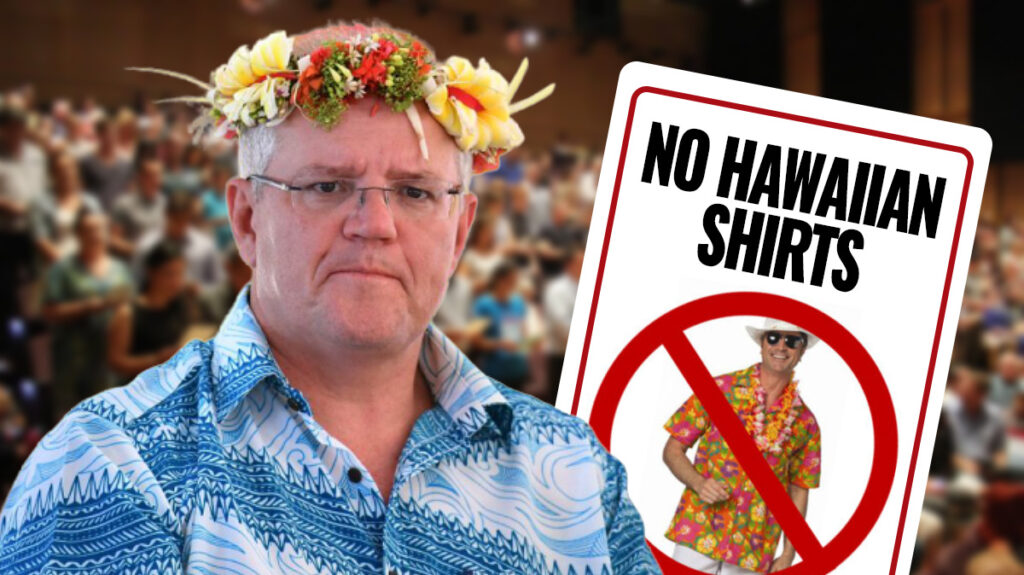 Prime Minister and hand shaker in chief Scott Morrison has today been forcefully ejected from his local electorate’s Australia Day ceremony, after he was seen flouting the government mandated dress code by wearing a Hawaiian shirt.

Before attempting the enter the event, Morrison cheerfully spoke to the media, “How good is a holiday?” he asked. “As you can tell by the shirt, I am in the holiday spirit. I feel like I haven’t had a proper holiday in ages. Like many other Aussies I just love this day, so I thought it would be amazing to see people joining this great nation, what’s more Aussie than that?”

However, after being turned away by security, the PM’s mood quickly changed. He had this to say about the incident, “How bloody Un-Australian is that? The notion of a dress code on a day like Australia day is just unbelievable!”

“As the Prime Minister knows, the only legally allowed clothing on Australia Day is an Acubra, thongs and a drizabone,” explained a local councillor in reponse to the Prime Minister’s complaints. “Don’t blame me though, I don’t write the rules, I just enforce them on the people who write them to teach them a lesson.”

The councillor was also forced to eject former Prime Minister Tony Abbott from the ceremony, who had misunderstood the dress code allowing for the wearing of thongs. “Jesus,” sighed the councillor. “As if the budgy smugglers weren’t bad enough.”

Reportedly the guard who turned away Scott Morrison has already been nominated for the next Australian of the year.