[Edition 45] The ranks of talent at Channel 10 became even more severely depleted this week after the sad death of one of its relatively popular presenters, Ms Sandra Sully. The long-serving network anchor passed away in tragic circumstances in Ten’s Sydney studio just minutes before she was supposed to present the Late News.

[Edition 45] The ranks of talent at Channel 10 became even more severely depleted this week after the sad death of one of its relatively popular presenters, Ms Sandra Sully. The long-serving network anchor passed away in tragic circumstances in Ten’s Sydney studio just minutes before she was supposed to present the Late News.

The fatality was caused in part by exhaustion from Sully’s network commitments which saw her presenting introductory smiles for a gruelling schedule of docu-tainments three nights per week. While some of her contemporaries have been known to lend their names to shows flippantly and with scant regard for quality, Ms Sully distinguished herself in the “Sandra Sully presents” series by rigorously researching each topic she presented to ensure that her pre-commercial-break throws were concise and well-observed.

Sully especially impressed advocates of Third World debt relief this year after ending a Rebecca Gibney World Vision special she presented with exquisitely concerned comments about “how it really makes you think” and “somebody really should do something”.

But the hectic schedule took its toll. Sully had been rushing from presentation to presentation for weeks and eventually expired last Thursday night when, not having eaten or drunk anything for days, she was left stranded under the glare of the Ten Late News studio lights waiting for an episode of The Panel to finish. Although the Late News had been scheduled to start at 10:30pm the Panel spilled over its allotted hour after Rob Sitch embarked on an indulgent 15 minute anecdote just after 10:25am. When Tom Gleisner finally drew the Panel to a close, the cameras crossed to the shocking image of Sully slumped across the Ten News Desk.

Paramedics from a new medical drama pilot in an adjacent studio rushed to Ms Sully’s aid, but they were unable to revive her on the spot and the ailing presenter was rushed to hospital. Doctors had hoped to be able save Sully but she was pronounced “Live as Rove Live” when she arrived at the hospital.

Sully’s loss leaves a major hole in the Ten line-up. While a number of replacement news readers have been identified, the loss is likely to be felt most acutely in the documentary department, with fears than presentation roles may need to be filled by documentary makers for a short time.

Sully’s funeral was attended by a diverse group of supporters ranging from people with no interest in quality news to people with no interest in quality documentaries, as well as a strong showing of stalkers. There were a few hiccups along the way, though, especially when the ceremony started earlier after Jessica Rowe was mistaken for a corpse. But in a tribute to Sully’s consummate professionalism, the service glossed over the human tragedy of her death with a smooth and pleasant presentation that ensured no viewers were upset. The highlight of the service however came from fellow news anchor Rowe who delivered a moving eulogy that lacked any fully formed sentences. Rowe dedicated her speech to her former rival and, in a fitting tribute, made an astounding number of errors reading what seemed to observers to be a very undemanding eulogy. 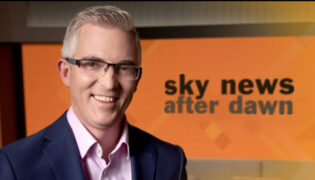 Mass media panic as two people ‘doing well’ after getting a bit too much vaccine
Do NOT follow this link or you will be banned from the site!