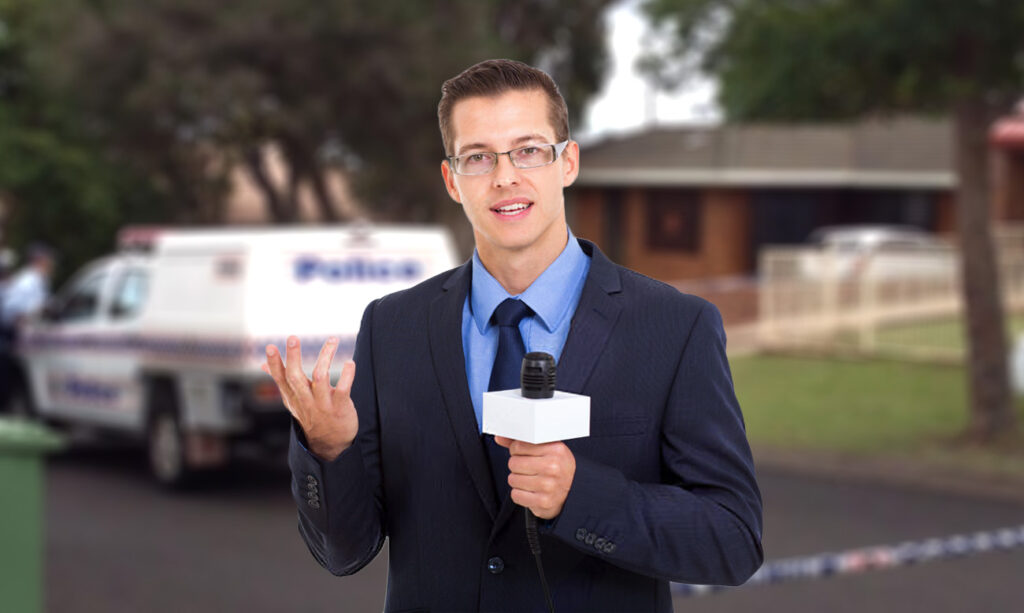 Channel 9 News reporter Ben Howard has managed to take cutting edge journalism to the next level this weekend as he delivered a news report about a fatal shooting, from in front of the house where the shooting happened, blowing the story wide open by reporting that relatives of the victim are “sad”.

Standing in front of the house where the murder took place, Howard answered the array of questions that the viewers normally find themselves asking such as “What colour were the bricks of the house?”, “Was it a one or two story house?”, “Did it have a garage?” and “Will the victim’s grieving relatives break down in tears if reminded about the murder by reporters repeatedly every time they try to leave the house.”

Questioned by other journalists on the scene, as they attempted to pad for the ninth hour straight, Ben said it was the gritty legwork of harassing grieving octogenarians that inspired him to take up journalism in the first place. “I always admired this form of reporting,” he told Channel Ten reporters. “Standing outside the house of the victims just gives an angle that you could never get from behind a desk, or by airing a police press briefing from a location distant enough that the victim’s loved ones don’t feel encroached upon. Plus if the traffic’s bad or if we just can’t be bothered we can just stop by any red brick one storey house and do the report from there. It’s not like it really makes any difference.”

However Ben says that he prefers to not deceive viewers in this way, and will go to great lengths to film in from of a victim’s house, even if it means crossing a police line, disturbing crucial evidence, or ignoring the pleas of the bereaved family to give them space in their time of grieving. “Fact is if we didn’t spend all the time travelling to different locations where people were shot, I’d be forced to use all my time being more ‘journalistic’, following leads, investigating scandals, and that’s just not what the public expect from reporters these days.”

Ben also reflected on his fondness for coving natural disasters from the front line, citing the time cyclone Debbie hit Queensland as a classic example. “We spent three days traveling up to Queensland despite specific warnings from emergency services, and I’ve really got to hand it to our helicopter pilot for going out on a limb after we discovered we couldn’t get past the roadblocks by car. I mean, yes we did end up just filming the segment in a hotel room because of all the rain and wind making it impossible to film, but us being able to stand in that hotel room only a few kilometres from the cyclone and have that little bar at the bottom of the screen that said ‘Queensland’, I think that really made the difference for viewers at home.”