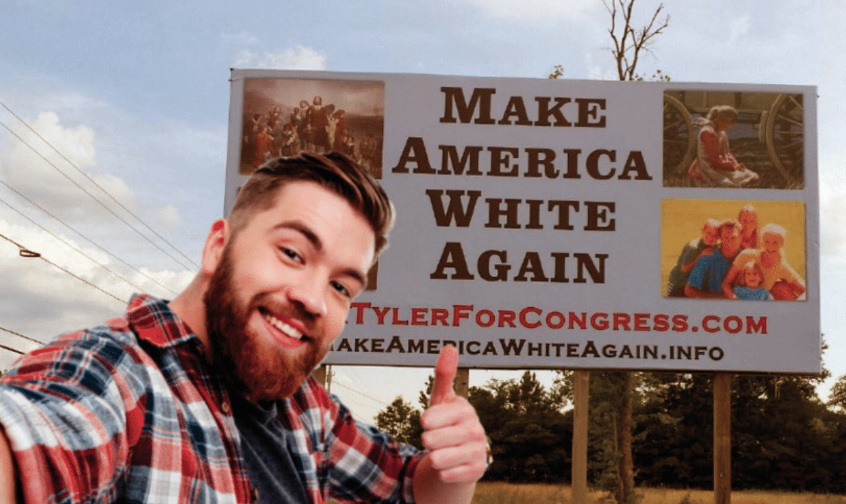 Travelling through the United States can be a confronting process nowadays.  The sheer number of Apple Stores can overwhelm even the most seasoned traveller. Plus there’s the whole extremist government thing. Luckily, there is a way to experience all the unpleasantness first-hand, while maintaining a moral distance to avoid being implicated in it.

It’s called Anthropological Tourism – and it’s the best way to travel through the United States, without feeling any need to lift a finger to the slow creep of fascism. Anthropological Tourism is not for everyone. It’s only accessible if you’re so privileged that extreme vetting of religious minorities feels like a fun lark or, at the very least, a minor inconvenience. Trump’s racial and religious policies should provide only a theoretical problem to you, and in no way pose a threat to your personal safety and security.

If this sounds like you, then you’re ready to experience White Tribalism first hand.

What is White Tribalism?
White Tribalism is the new phenomena in the United States. This hot new trend sees white Americans voting in a bloc, just like minority voters. All done with a hipsteresque mimicry of lives from a tougher world than they have ever known. That’s right, Whites are now the world’s only majority minority. In America, even the minorities are super-sized! Whites have started behaving exactly like an oppressed minority without any of the actual oppression! It really is something worth seeing up close. But right now you’ve got a once-in-a-lifetime opportunity to see it up close, and one you’ll want to act on quickly, as the expectancy of your lifetime may soon be rapidly decreasing.

It sounds a bit like fascism?
You might think you’ve seen this all before. The history books are littered with powerful majorities inside a nation acting as one, motivated by fear, to eliminate the ‘other.’ But don’t worry – White Tribalism isn’t fascism. It can’t possibly be fascist, because Americans won the World War II, and America was against the fascists back then.

How did White Tribalism start?
Exit polls conducted by the fake news organisation CNN showed that 62% of white men voted for Trump. The last time there was such unanimity among white men was at a ‘cultural gathering’ at Cronulla Beach. White women were also on board the Trump Train. 52% came out to vote for the candidate endorsed by the Ku Klux Klan.All other races surveyed ended up strongly preferencing Clinton – with 94% of black women voting for her. The White Tribes movement failed to resonate with this group. Prudes!

But isn’t everyone a little bit racist?
Of course, this is by no means the beginning of racism in the United States. It’s just made it fun and funky again. It’s no longer ‘30s drab. It’s now, it’s fresh and you can see them across the entire country.

So are you suggesting I go to America simply to gawk at racists?
Pretty much! This journey is not for all. But if you are willing to put aside the suffering of your fellow human beings for your own hedonistic pleasure then this could be your Willy Wonka’s Chocolate Factory. Dark, but fascinating. Friends may suggest your trip is exploitative. They will denounce you on Facebook. Don’t worry! Theirs is a conspicuous morality, designed and tested for an algorithmic spectator. You are above this. You are living the examined life of an Anthropological Tourist. Your discoveries may form a considered Wikipedia entry or, at the very least, a bloody good giggle over a sirloin and shiraz with Pete, your subtly racist next-door neighbour.

And who can deny that the White Tribalist bloc is a sight to be seen! Some activists have suggested they’re undermining American democracy. But they’re not visiting for a week and they’re not stacked with cash.

Where do I begin?
Start with any major news channel. The tribalists on the panel mark themselves with a high-pitched warble and polka-dotted bow ties. They’re identifiable by their singsong mating call to ‘Make America Great Again’, a hark back to simpler times when things were less confusing because every voice outside of the status quo was completely silenced. It’s just like the serenity of a river retreat underpinned only by constant, horrifying violence. Away from the screen, approach these people with caution. They are easily scared and will quickly retreat back to their Twitter accounts if they feel threatened. Once safe, they will employ trolling tactics and Russian hackers to discourage further visitors.

What if they attack me?
Remember, even if one starts directly attacking you, be certain to only ever treat them with the utmost respect. Otherwise, you risk being treated like they treat minorities – a highly unpleasant experience which will really ruin your holiday. Do your best to leave their location the way you found it and be sure to excuse any otherwise reprehensible behaviour as purely a result of economic factors despite those in the lowest socioeconomic status in the region being disproportionately people of colour. Some will call this excuse paternalistic and patronising but really it’s just good manners.

Where do I find them?
These tribes used to be easy to spot. One would simply wait until nightfall and follow the light from the burning cross. Unhelpfully, the light has gone out and their distinctive white hoods have been replaced with harder-to-spot red caps. Nowadays it’s more of a challenge since they’re spread fairly uniformly across the nation, if occasionally outnumbered by three million or so – but those numbers hardly matter anymore. Tragically, their traditional grounds have been slowly displaced. Currently, it appears their migration pattern will be moving them towards the White House but if you want to see this migration in progress, go soon because if there is a just God looking over this nation, it surely cannot last for long.

What if my skin is too brown to be an Anthropological Tourist?
You’re in luck (sort of). There are signs this movement could be launching a full world tour, the likes of which haven’t been since in 70 years. Unless you live in Russia, you stand a great chance of catching the live tour later this year.So, whether you’re touring in the USA, or waiting patiently at home for the militarised tour-buses, take the chance to check out the people driven to collectively undermine the political power of others. It’s really a sight to behold – and once you see it, you simply won’t be able to look away. In fact, it’s so, so important that you don’t look away.

This article originally appeared in The Chaser’s America (CQ6): buy it here.