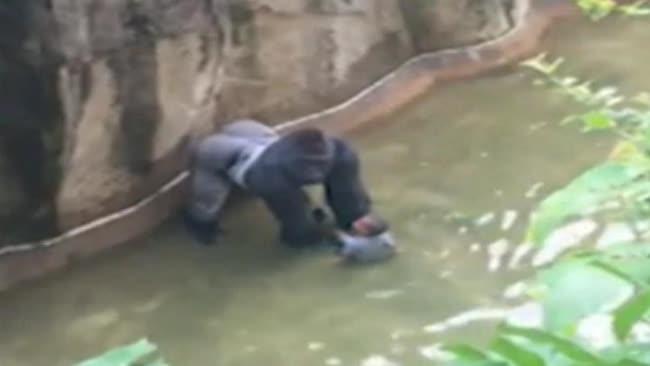 Cincinnati Zoo authorities have released new information that shows suspicious links between the gorilla killed on the weekend and Islamic State.

But the zoo has denied it was attempting to quell the moral outrage that has followed the killing of Harambe – a silverback Gorilla who was shot after a child fell in his enclosure – by blaming it on terrorists.

“Actually, I first started getting suspicious a few months ago. He stopped being social and became very withdrawn,” said a spokesperson for the zoo, Hans Fischer. “I figured it was just because he was locked in a zoo. But then I found smears of his own faeces under his bed. I could have sworn it looked like Arabic and said ‘Kill all the infidels’. Or maybe it was just poo.”

Mr Fischer said he believes authorities were right to shoot the 200-kilogram Gorilla. “We couldn’t risk putting a child’s life in danger like that. Who knows how many chapters of the Koran he might have been indoctrinated in before we could get help?”

A source at the National Security Agency said that zoos nationwide had been put on alert. This is clearly a reason to start bugging plush toys of every American child who has expressed a desire to visit a zoo. We can’t be too careful.”

“I wouldn’t be surprised if the Pentagon started conducting tactical drone strikes against zoos. After all, Al Qaeda has a cell-like structure, and so do zoos.”

Responding to critics who labelled the conspiracy as “bull shit”, Mr Fischer replied, “Bull shit? I’m pretty sure it came from a Gorilla… but we’ll run some tests.”

Get the full experience, in HD paper: subscribe to The Chaser Quarterly