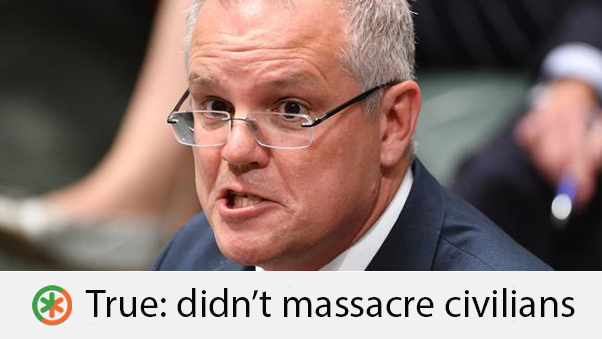 In response to protests demanding the government start taking violence against women seriously, Prime Minister Scott Morrison bragged that “Not far from here, such marches, even now, are being met with bullets, but not here in this country.”

Our fact checking team have tested this claim and find the assertion by the Prime Minister that technically he is better than ruthless dictatorships who massacre their own citizens, which is ‘big win’ for the PM according only to the PM.

To the women in the country who may have taken some issue with the statement, just remember that you did not have a heinous war crime committed against you by your leader, which apparently is where the line is now.

So congratulations women of Australia, it could technically be worse. The Prime Minister of Australia has not broken UN laws about how to treat human beings, in this specific case. Other cases like the treatment of refugees, not the exact same outcome.

The idea of brutally slaughtering the protesters clearly entered the Prime-Minister’s mind — however again it should be stressed he did decide not to go ahead with it, proving that maybe that empathy coach wasn’t a complete waste of taxpayer money after all. If it was that close in his mind, maybe that’s what tipped it to a ‘probably not going to do that actually’.

Our fact-checking team has also come to a conclusion on his implication that women should be grateful they aren’t inhumanely mowed down by unrelenting bullets for not wanting to be raped, the official verdict being: ‘Holy Fucking Shit that is some complete-psychopathic bullshit! That’s the kind of shit abusers say to victims but he aimed it at half the country. This feels like it shouldn’t be real, what the actual fuck is going on? How did he somehow manage to make it worse than just not showing up?”