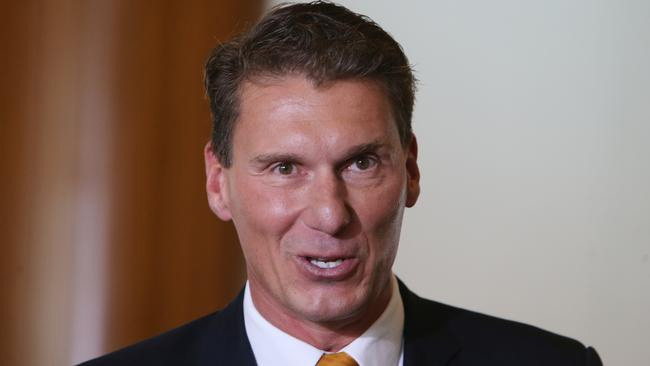 Australian Conservatives leader and part time anti-dog-marriage warrior Cory Bernardi has today announced that he will be formally de-registering his political party, in the wake of having accomplished everything he set out to do. “My plan all along was to kill off not one but two of Australia’s leading conservative political parties,” announced a tearful Bernardi this afternoon, “and having successfully absorbed and destroyed Family First at the last election, by shutting down the Australian Conservatives only two months later, my mission is now complete.”

Mr Bernardi is reportedly now in talks to rejoin the Liberal party, with Bernardi stating he might as well aim for a hat-trick. “By rejoining the Liberal Party, I will finally be able to drag the party further to the right. I think my stunning election results of winning one whole seat clearly shows this is what the majority of Australians want.”

“Sure, I may have only gotten 0.6% of the vote, but that’s only because once again the silent majority of Australians decided not to turn up and vote for me. I’m sure that’s what it is, otherwise it would mean that I’m just an out of touch narcissist who nobody likes, and I know for a fact that I’m far too popular and attractive to be a narcissist.”

Asked why he had even left the Liberal Party in the first place if he was just going to rejoin them again right after the election, Bernardi said the many accomplishments of the Australian Conservatives speak for themselves. “When I left the Liberal party it was because I feared we were on the brink of legalising gay marriage, which I warned would lead to people marrying dogs. But now, two years after same-sex marriage was legalised – not a single man-dog marriage has taken place. You’re welcome Australia.”

Speaking on what he plans to do with his time now that he will no longer be heading up the Conservatives, Bernardi says that he hopes to spend his time fishing at Coffin Bay, at least until the bay is destroyed by rising sea levels and the fish all die because he spent his entire time in Parliament worrying about gay people instead of dealing with the growing climate and ecological catastrophes that every single scientist has been warning him about for the last ten years.

“I hope that when the next generation look back at my career,” says Bernardi, “they’ll look around the burning, desolate wasteland around them, and thank their lucky stars that I was out there every day, fighting to prevent gay people from celebrating their love. That’s a legacy I think anyone would be proud of.”