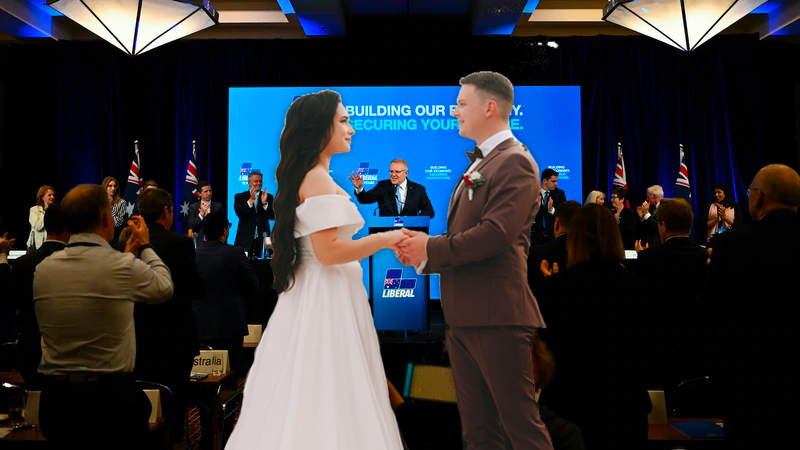 “Finally, some government hypocrisy I can get behind!” Said one planner, “Couples are stressed enough with planning the wedding, the economic crisis and the pandemic, so this will hopefully ease some stress. Not only does it allow for a lot more guests, they no longer have to worry about things like date and location because they have to fit in with the function. It is a win, win, win. The only downside is it means there are a bunch of Liberal party members around the wedding. I mean there is no way they would follow a gift registry, you could need a toaster and they would just give you tax cuts for the rich. However, they might get confused and think it’s a friend’s event and funnel a few million in gifts from the budget.”

In order to not arouse suspicion, planners have suggested a few tips to their clients to help fit in at a Liberal Party event.

“I have told clients to make their vows things they plan to just ignore as soon as everything is done. And to add in the phrase ‘How great are weddings!’.”

“Plus, instead of using cars to get to the event, get everyone else to pay for you to arrive via helicopter.”

“Also make sure if your guests are thirsty, take some money from them claiming you will immediately buy them water, then just give the money to your mates and don’t get them the water.”

“Lastly, make sure your wedding is powered only using non-renewable energy, and if you could replace the diamond engagement ring with a lump of coal, that would go down great.”

But some couples have shown concern for the changes, partly because it would involve attending a Liberal Party event, but mainly because they no longer have an excuse to not invite ‘Jess from work’ to the wedding.