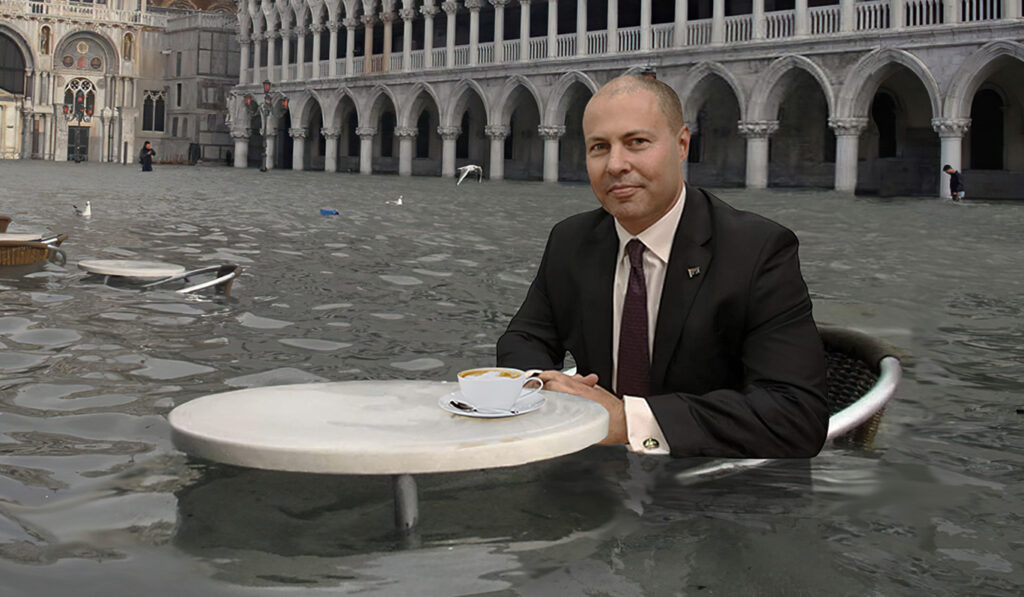 Liberal Party minister and part time before-picture Josh Frydenberg has today enjoyed a coffee in the world famous St Mark’s Square in Venice, which he has declared “perfectly normal” and “definitely not under a meter of water thanks to the growing effects of climate change.”

Spotted sitting in the landmark by journalists on Thursday while they reported on the highest tides ever recorded in the city, Frydenberg was quick to point out that he couldn’t see what all the fuss was about. “I’m just enjoying a nice expenses paid holiday thanks to my friends at ExxonMobil, and frankly I think everyone should just calm down and wait till all the facts are in before blaming this on any one cause.” explained Frydenberg, as his table got swept away by the tide.

Asked whether it was appropriate to be taking expenses paid holidays from a lobby group, Frydenberg said it was perfectly okay. “Yes, this kind of thing used to be frowned upon,” he explained while frantically paddling, “but since Cormann got that free holiday from HelloWorld and didn’t face any consequences, everyone’s doing it now!”

“Boy the weather here sure is balmy!” Frydenberg continued, shouting over the thunder and lightning as a wave crashed over him, taking his briefcase. “Well, that’s my work gone for the day. Whats say we all head to the beach next to soak up a bit of a tan?”

However, Frydenberg’s upbeat spirit was shortlived, with his young children signalling they were having trouble breathing, given they were 30cm under water. “Whoops, guess we’d better head for high ground!” said Frydenberg, fishing his son out of the water. “Later journos! Gotta go save the next generation from this mysterious but very normal weather!”

UPDATE: Frydenberg has now admitted the water may be slightly higher than normal, but only because the Greens probably banned rainwater drains