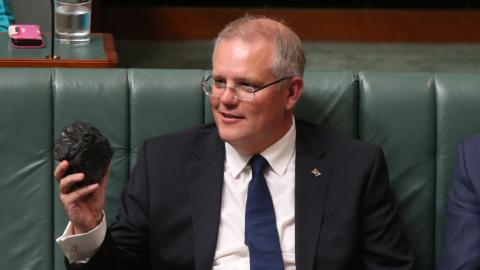 The latest Newspoll out tomorrow has revealed that an inert lump of coal is now the preferred choice to lead the Coalition government, after its debut in parliament showed it to be the more likeable than any other Government frontbencher.

The result is a stunning turn of fortunes for one time Liberal Party golden boy Scott Morrison. Following a string of missteps in recent days that saw the Treasurer admit that million dollar house prices may be slightly unaffordable for young people, outraging conservatives, before backtracking and stating that young people should just move to low income regional areas to afford a house, outraging anyone with half a brain, the one time preferred leader of the Liberal party has now slid to fourth place in a party poll for preferred leader with new rival, a solid chunk of unprocessed coal, taking out the number one spot.

The rapid rise in fortunes for the lump of coal is believed to have occurred during question time two weeks ago, when the inanimate rock introduced as a stunt by Morrison unexpectedly resonated with audiences, with viewers rating the inanimate rock as both more personable and likable than Scott Morison, Michalea Cash and Peter Dutton combined.

Viewers were also impressed with the coal stone’s working class origins, having started out in a coal-mine job before hitching a ride to Canberra on the back of a truck. “That lump of coal is the real deal.” said one party member, “When people look at this coal they just think job creation, they think rock-solid stability, but most of all they see power. Dark, filthy, environment destroying power. And there’s nothing a Liberal voter loves more.”

Many party members also expressed their belief that the coal would do a good job bringing in younger progressive votes. “Labor may have us beat with the support for same-sex marriage,” said one Liberal backbencher who had campaigned for the lump of coal, “but I really feel this coal could turn around our image for young people. Having the first black Prime Minister, it’d be groundbreaking, in more ways than one.”