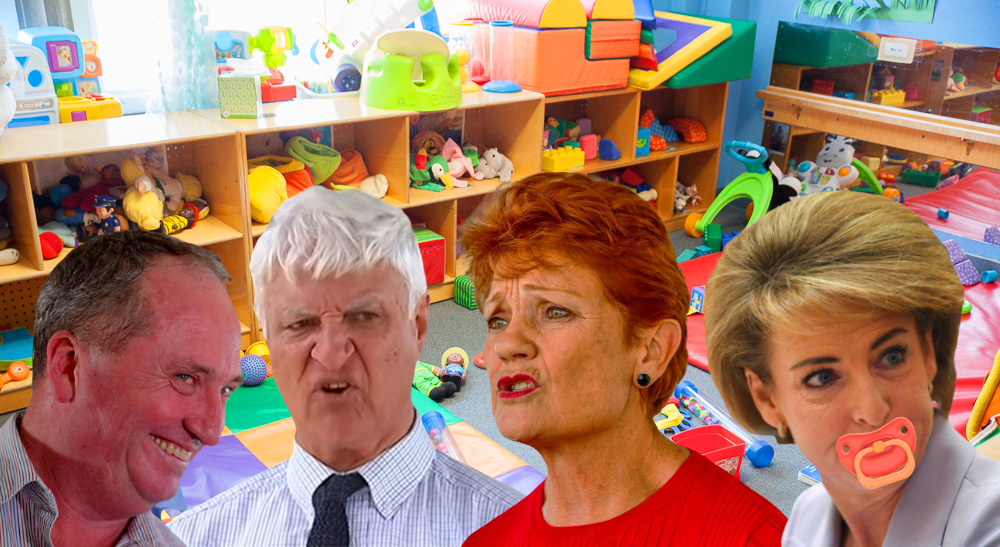 Prime Minister Scott Morrison has today announced that all childcare across Australia will be free for the next 6 months, in an attempt to reduce stress on those forced to look after children, such as the families of MPs who have needed minding since parliament closed.

“This will be a great reassurance to many Australians who have been struggling during this difficult times, from the family of Bob Katter to the nurses who look after Barnaby Joyce.” announced Morrison. “Not to mention the poor people who have to deal with Pauline Hanson running off to lay in a field every time they take their eyes off her for three seconds.”

“We’ll even be holding lessons while the children are under our care, including teaching things like basic maths for the treasurer who said that the budget would be in the black this month when it was actually $300 billion in deficit, and writing lessons to teach Barnaby Joyce to write a Sydney Morning Herald article without falling back on that tired ‘and then I woke up’ trope.”

The government also clarified that the measures would extend to former politicians who clearly have far too much time on their hands and not enough people stroking their egos during this crisis. “Yes Kevin Rudd will absolutely be covered,” explained Morrison, “we’ve actually allocated three carers for him to ensure he gets the constant attention he craves. Same goes for Paul Keating too.”

“We’ve also tasked a special helper to keep an eye on Tony and make sure he’s eating healthy meals and not putting strange things like raw onions in his mouth.”