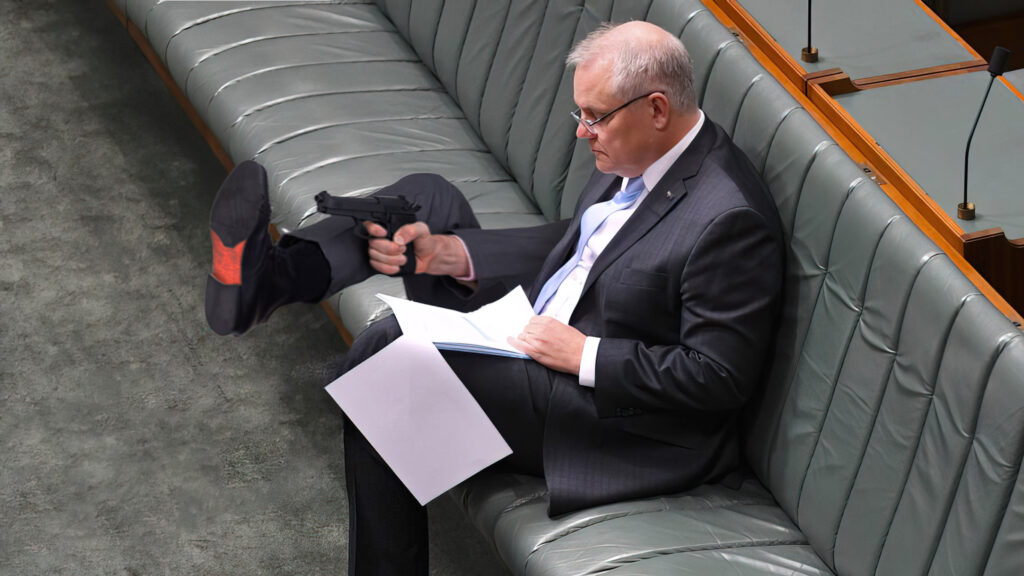 Outgoing Prime Minister Scott Morrison has today clarified his earlier comments stating that women protesters should be thankful they’re not getting shot, after revealing that this is because the Prime Minister has used up all the bullets shooting himself in the foot.

“I think you’ll find someone at News Corp was once raped, so there’s no problem in parliament,” said Morrison today while carefully aiming a gun sight at his big toe and squeezing down on the trigger. “So maybe don’t throw stones in glass hou… OW GOD DAMMIT IT WENT OFF AGAIN. WHY DOES THIS KEEP HAPPENING?”

This is just the latest in five separate incidents this week that has seen the Prime Minister and his staff shoot themselves in the foot in what doctors are calling the worst public health epidemic since Barnaby Joyce’s sex life made headlines in 2018. “It’s terrifying, at this rate we’re going to run out of hospital beds by April,” warned one doctor, “what with every second minister taking health leave right around the time they get in trouble, and the Prime Minister shooting himself in the foot on the daily, well the Liberal Party’s finally living out their dream of completely crippling the public health service.”

“We’re considering intubating them all just to keep them from saying something stupid. Frankly it would only speed up their recovery.”