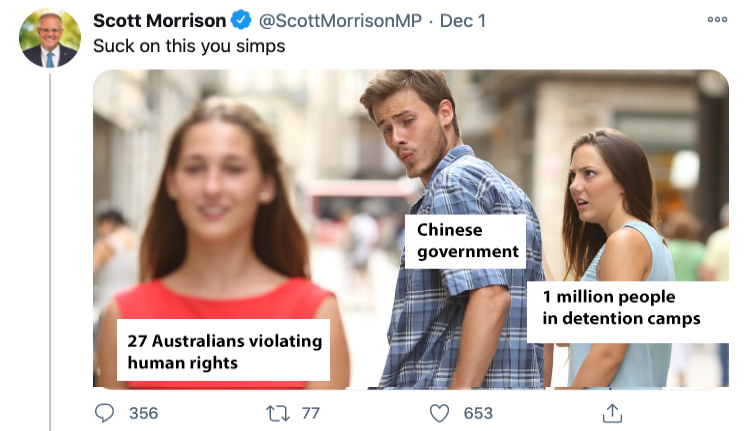 Prime Minister of Australia Scott Morrison has today thoroughly pwnd China in the meme war, after he dropped a spicy distracted boyfriend meme in his timeline in retaliation for China’s last missive.

Declaring the entire Chinese government “simps”, Morrison has warned that China must retract yesterday’s meme, featuring a picture of an Australian soldier slaughtering children, otherwise he will be forced to unleash Australia’s full arsenal of Awkward Penguin gifs.

“I don’t often criticise foreign governments,” stated Morrison while holding a beer in a press conference today, “but when I do, it’s because they pointed out war crimes.”

Asked why they were so focused on other countries problems, instead of addressing their own internal failings on human rights, both governments responded, “No it’s fine when I do it, they’re the real human rights violators,” in the form of an official diplomatic surprised spiderman meme.