National
Petition to get Scott Morrison to actually do his fucking job
July 13, 2021 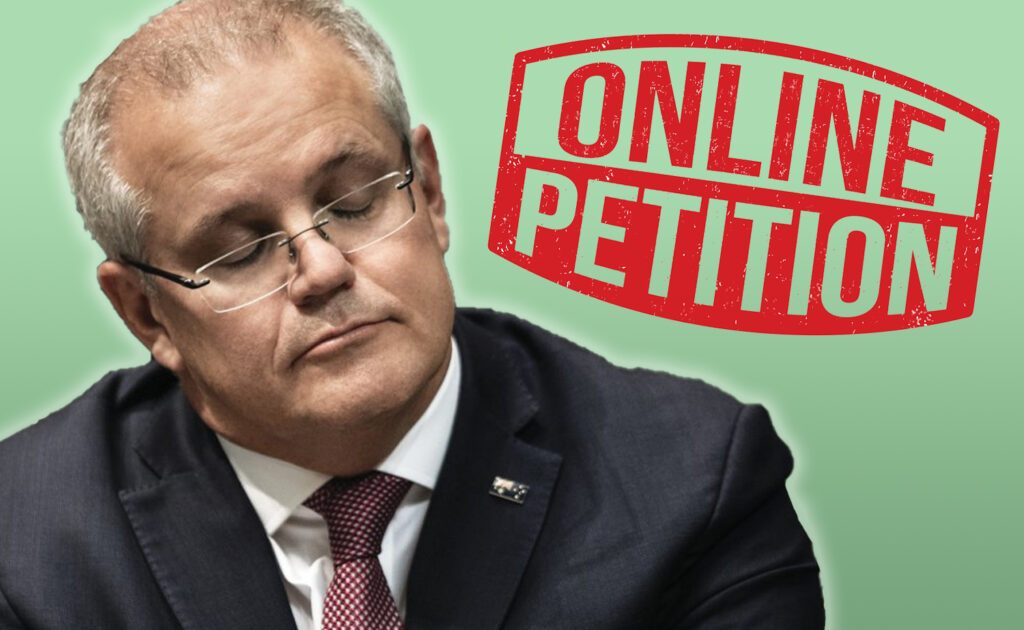 In the wake of The Prime Minister’s near total absence from the political scene as Sydney faces its biggest crisis of the pandemic, The Chaser has launched a petition to try and get the Prime Minister Scott Morrison to turn up for work.

We, the undersigned, hereby petition to Prime Minister of Australia Scott Morrison to actually do your fucking job.

We understand that working from home is hard and that there are plenty of chicken coops to pretend to build, and curries to pretend to make, but the biggest city in your country is in deep crisis and you have, once again, fucking disappeared. What the actual fuck?

Don’t get us wrong. We’ve always known you’re a useless piece of shit. When the bushfires were burning, you went to Hawaii. When Melbourne was in crisis, you drank beer at the Sharkies and posted selfies from Bunnings. When an alleged rape happened in your own workplace you didn’t even bother to read the report.

We know your recent trip overseas to visit the historic pubs of England was important to you. But perhaps you could have more usefully spent the time overseas getting more vaccines for our country. You know — the *one thing* that you’re responsible for.

Securing enough vaccine is the least you can do in this circumstance. And we don’t mean that figuratively. It is basically the bare minimum that you can do, you dickhead.

At this point, it is not exaggerating to say that a soggy cup of hot chips would do a better job of running the country than you.

In fact, here’s a thought. Why don’t you get on a plane, jet around the world and not come back until you’ve got an extra 50 million doses of vaccine. Pfizer, Moderna, Astra Zeneca, whatever. Hell, at this point, we’ll even take that faulty one from Queensland that gives you AIDS. If you’re worried that the 50 million doses won’t fit into your luggage, don’t worry. We’ll all be happy to chip in for any baggage charges.

As the people of Australia, we humbly and respectfully request that you, for once in your life, do your fucking job. Get on a plane and don’t return until you’ve got enough vaccines for everyone. Not next week, not next month. Not by the end of this year. Now.