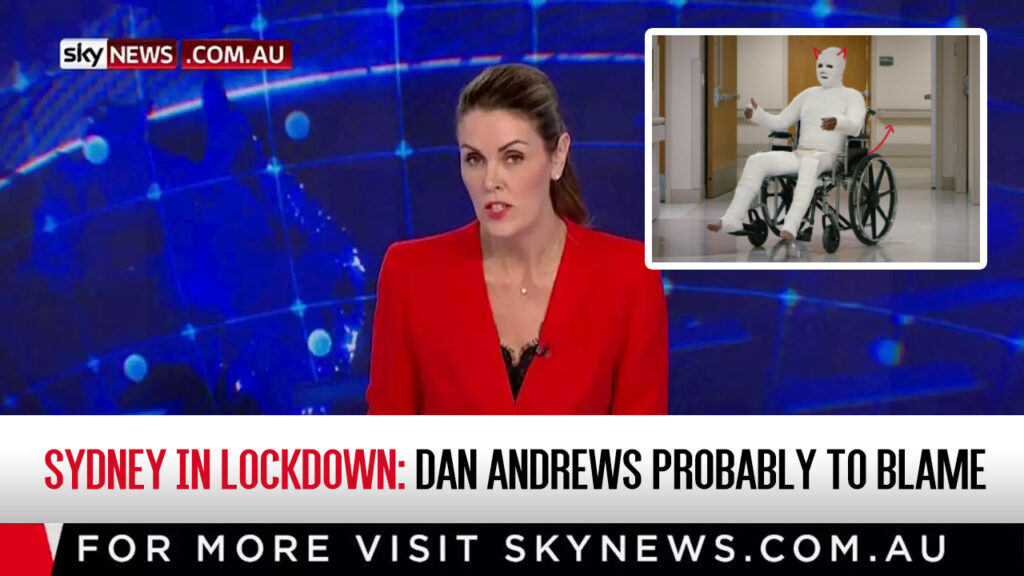 Sky News has today sent its staff on a frantic contact tracing mission to find some way to link the Sydney lockdown to Dan Andrews.

“Yes sure Liberal Premier Gladys Berejiklian announced the lockdown, but I think we all know who’s really behind this,” raged Peta Credlin from behind the desk today. “This unwarranted intrusion on our right to sit in a restaurant while a deadly virus circulates has all the hallmarks of that monster biding his time in the spinal trauma recovery unit, presumably plotting all kinds of dastardly deeds from his body sized cast.”

“Until we have absolute evidence to the contrary, it is my duty as someone pretending to be a journalist to fearmonger and point the finger at anyone I don’t like,” continued Credlin. “As such, I am today calling on Anthony Albanese to stand down over his shameful failure to oversee a successful vaccine rollout, due to Labor’s corrupt and calculated losing of the federal election just to make Scott Morrison look bad.”

However, others on Sky News have taken a more conciliatory tone, stating that Sydney isn’t technically in lockdown so it’s okay. “Unlike Dan “Hitler” Andrews and his monstrous lockdown, Gladys has taken the very sensible approach,” explained Alan Jones this afternoon. “All Gladys has done is tell everyone not to leave their homes unless they have to, and that they can’t leave the city, and that you have to keep 4 meters between people indoors so most indoor venues have to close. So as you can see it is a much better, much less dictatory plan that I think we can all be proud of. Vote Gladys!”