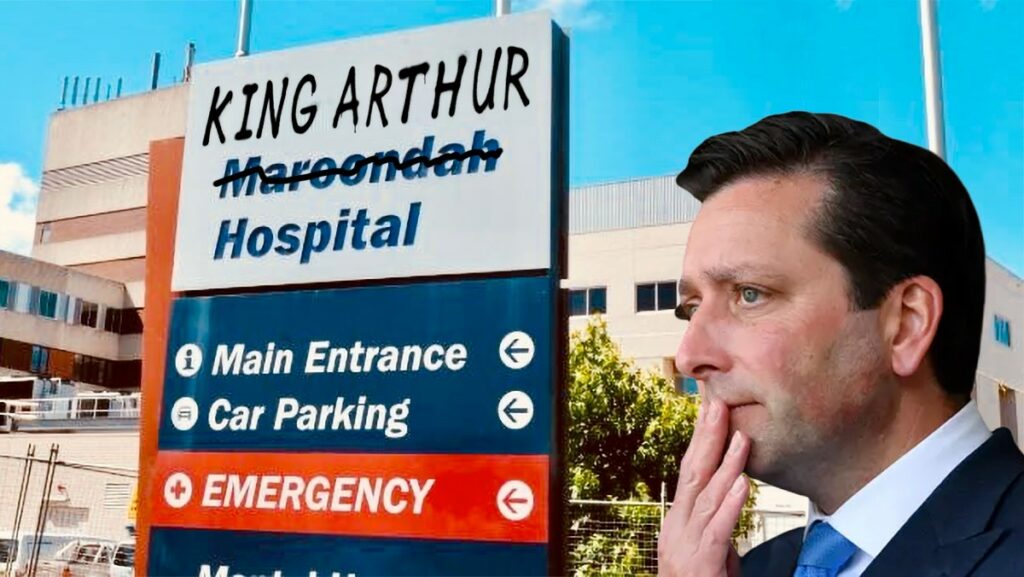 Matthew Guy’s Election campaign has officially been announced today with a solemn promise to rename Maroondah hospital to something even more reminiscent of a monarch with a legacy based on fiction.

“It was well known that Arthur was the best and wisest king in all of the Britons,” announced Guy in Victorian parliament today. “He defeated the black knight and that vicious rabbit, all before horses were invented! We can think of no better representative for this very real and vital medical facility.”

However, Dan Andrews has hit back at the proposal, stating it is vital that the hospital be renamed after The Queen. “The fact is that without this hospital renaming, nobody will ever remember Queen Elizabeth,” sobbed Andrews. “The poor woman has never had any recognition, apart from the coins, stamps, portraits, statues, a couple of towns and a boat named after her, and that Netflix series. Oh and a few movies. I mean, she’s basically forgotten already if you ignore all the media coverage. Maroondah meanwhile, you never stop hearing that name.”

Asked what they thought about the naming issue, a doctor from Maroondah hospital told reporters that the choice to name a hospital after a famously recently deceased person might not have been entirely thought through.

“Look to be honest, you could call it the Adolf Hitler Memorial Wing for all I care,” said an exasperated Doctor on his third double shift that weekend. “You can call it whatever you like just please for the love of God hire more staff!”

Update: Matthew Guy has rescinded his proposed name, stating he much prefers the doctor’s suggestion