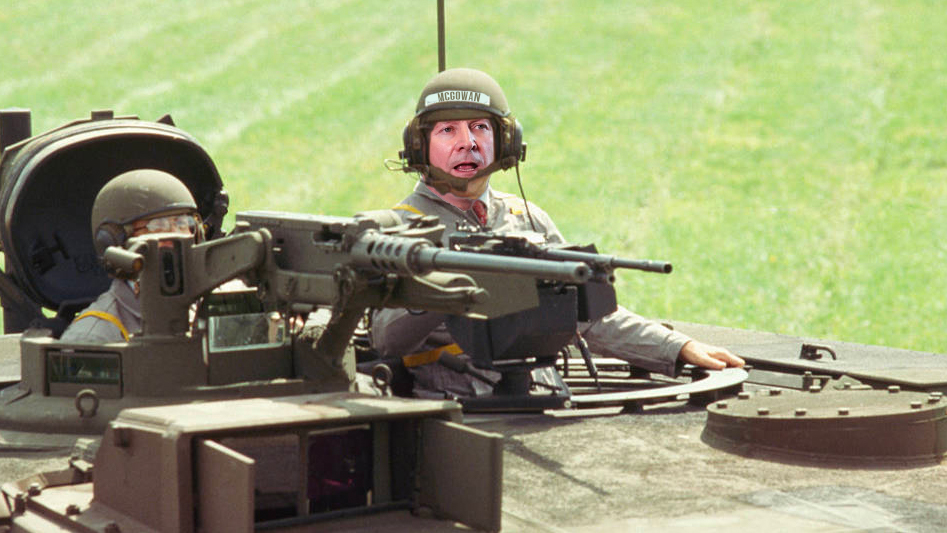 Mark McGowan has been speaking to the press from the turret of an M1 Abrams tank, it has been confirmed. The vehicle flies a flag with his face on.

“A strong state needs a strong leader. That’s what Gladys never understood,” shouted McGowan, who was wearing a beret featuring a brass badge in the shape of Western Australia behind two AK47s.

“Covid will never come to our sun-blessed land. The republic – I mean state – of Western Australia will never be undermined by those rats from the east,” he continued, punctuating his speech by banging his fist on the metal. He then emptied his revolver in the direction of Canberra.

McGowan offered to take questions from journalists, before theatrically casting his eye around and choosing one wearing the same jacket and earpiece as his minders.

Speaking from beneath the premier’s statue in the newly-unveiled McGowan Plaza, one nervously smiling resident confirmed Mr McGowan had killed a brown snake by karate chopping its head, bowled a perfect game and invented a new type of space rocket that no one is allowed to see yet.

“That’s why every one of us has a picture of him in our house. Certainly not because we have to, haha! We want to!” they said a little too loudly, while looking around and nervously polishing their WA Labor membership card.