News
Owners of Big Banana disappointed it hasn’t been named as a terror target
December 10, 2018 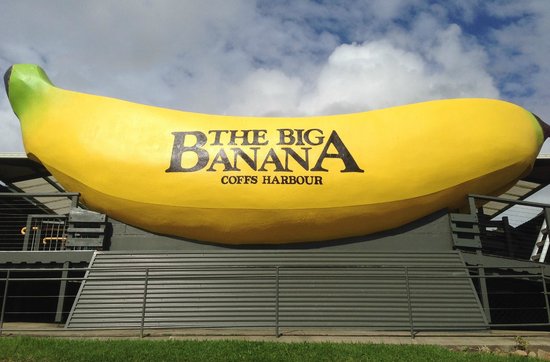 Colorful Coffs Harbour business identity Pete Monkhouse has criticised Australia’s aspiring terrorists for failing to name The Big Banana as a potential target this coming festive season. “All we ever hear about terrorist attacks in Australia is Opera House this, Federation Square that,” Monkhouse complained. “I wonder if ISIS and the like realise just how big this banana is. I mean, we’re talking about the biggest banana in the world. Or at least New South Wales”

Monkhouse says that his Big Banana souvenir store, café and ice rink, would be a worthy target for a terrorist. “Perhaps they don’t understand the strategic importance of the Big Banana for the entire Coffs Harbour region,” he said. “Or maybe they do, and are afraid they’ll choke under the pressure.”

Monkhouse also blames the media, with the exception of the Coffs Harbour Advocate, for ignoring the Big Banana in coverage of possible terror targets. “You just have to look at some of the places they’ve included,” Monkhouse explained. “Like Lucas Heights, for god’s sake! There’s nothing even remotely oversized there.”

After the September 2001 terrorist attacks Monkhouse had always anticipated an attack on the Big Banana. “If they hate our freedom, they certainly hate our banana,” he said. “It’s a quintessential part of the Australian way of life. Come and see why – we’re open late for daylight savings.”

Just in case he’s proven correct, Monkhouse has taken matters into his own hands, running a “Visit Now Before We’re Destroyed” promotion all summer holidays.