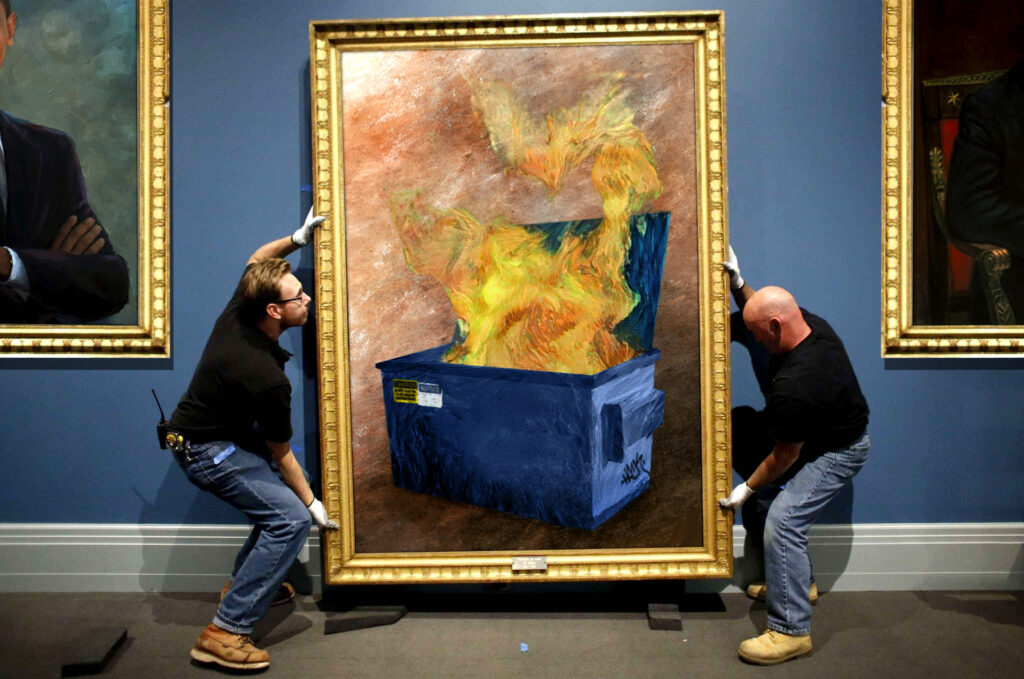 The White House has today unveiled its official portrait of golfer and part-time President Donald J. Trump at a ceremony in Washington DC. Revealing the image chosen to capture the ‘spirit and character’ of the United States’ 45th President, onlookers say they were pleasantly surprised how spot on the depiction was.

“Look at the detailed way that the flames lap up the side of the dumpster as it throttles down a hill,” commented one critic, “and look how they perfectly captured the stink lines for the vile pool of tepid bin juice oozing out of the base of the runaway dumpster fire.”

“It’s as if Trump were here right now standing in front of us, but of course he’s not because he’s too busy watching Fox news in case they mention his name.”

Asked why he chose to depict Trump as a dumpster fire, the artist John Painter said he wanted to capture Trump’s controversial nature. “You know I really wanted to bottle the spirit of the guy who tried to blackmail the Ukranian President into creating dirt on his main political opponent, the guy who tweeted out that he has ‘unmatched wisdom’ while also mis-spelling words, who admitted to his crimes live on camera after denying they happened only days before, the guy who pulled troops out in the middle of a war without telling anyone, who used a sharpie to fake a weather map because he couldn’t admit to making a mistake, a guy who wanted to fill a 200 kilometre moat with snakes and crocodiles, and asked his staff to cost it. A guy who suggested we could fight coronavirus by injecting people with bleach, and then claimed he was being sarcastic despite having defended it only hours earlier. A guy who said there are ‘very good people on both sides’ when asked about a Neo-Nazi rally where a woman was run over with a car. A guy who was out playing golf when America reached 100,000 deaths due to a pandemic. A guy who… well, how long have you got?”

Donald Trump was contacted for a response to this story, but was unavailable to comment due to a previous commitment to covfefe