WRITTEN BY
John Delmenico and Brenton Fuessel
The Chaser Quarterly 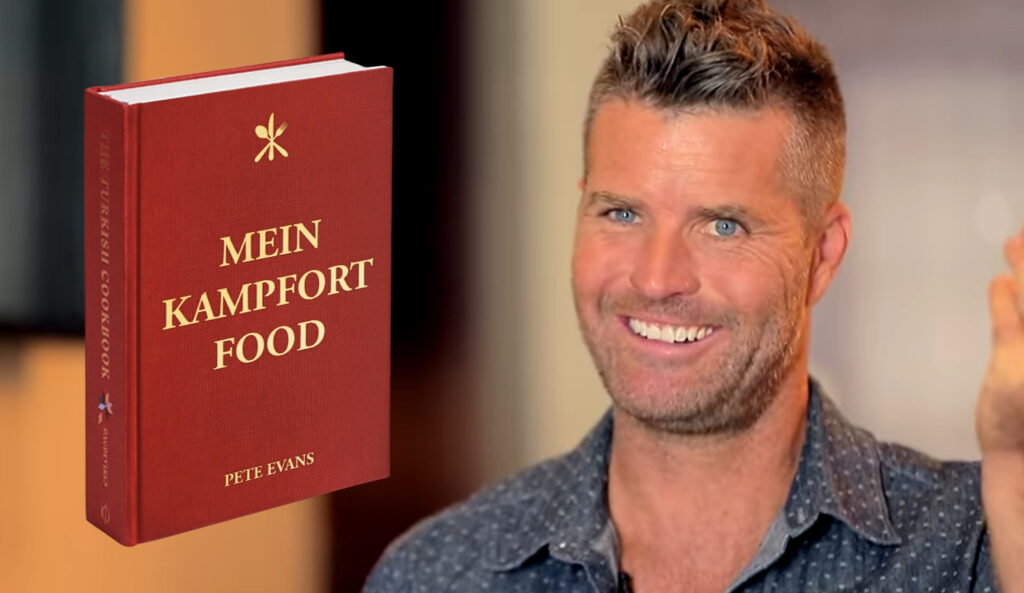 Review: Chef Pete Evans’s latest cookbook ‘Mein Kampfort food’ is the perfect recipe book for anyone who hates the foods, medicines and science that existed after the Palaeolithic era (barring a brief period of 1930’s Germany). Travel back in time and learn how to prepare food based on the superior era for humans when our ancestors hadn’t yet invented toilet paper and all died by the age of 30.

Evans leaves nothing off the table in this book, though he probably should because as far as we know cavemen didn’t own tables. One page you are reading about how Pete recommends eating nothing but almonds for a quick hit of cyanide poisoning, the next he’s suggesting you try serving your newborn child a deadly amount of vitamin-A via a bone broth (in Pete’s defence though, both recipes are a great way of getting out of having to read any more of his work). Pete also goes to great lengths to detail his struggle with the idea that people keep ‘falsely accusing’ him of being a neo-nazi conspiracy theorist, in the preamble to his exciting new swastika cake recipe.

Sadly the misery doesn’t stop there with the book under his new publisher and editor who previously worked on the Harry Potter franchise, hinting at some soon to come follow ups including:

Whether it is the deadly recipes claiming to ‘cure’ cancer or disabilities, or calling for eugenics to take out disabled people, this reads less like a cook book and more like the kind of thing you would see on 4chan or Australian breakfast TV shows. Overall sadly I have to give this book a score and so I give the book just 1 star, which is hopefully a symbol Pete is familiar with.

WRITTEN BY
John Delmenico and Brenton Fuessel
The Chaser Quarterly

War Memorial annouces exhibit on the horrors of Channel 7’s SAS
This is the Chaser's halfbaked plan to stay solvent
The Chaser is editorially independent, our stories are free from the influence of billionaires (unless they want to give us $100 - then we’ll print whatever they like). Unlike many others we haven’t put up a paywall because we know you wouldn’t pay for this garbage. But the revenue we get from advertising is falling, so we'd love it if you could throw us a few bucks to help us keep our writers alive.
Support The Chaser
Already a supporter? Click here to never see this again!
Do NOT follow this link or you will be banned from the site!