WRITTEN BY
Tyler Hamilton and John Delmenico
twitter: @TylerJamilton
1st of your 1,000,000 free articles this month 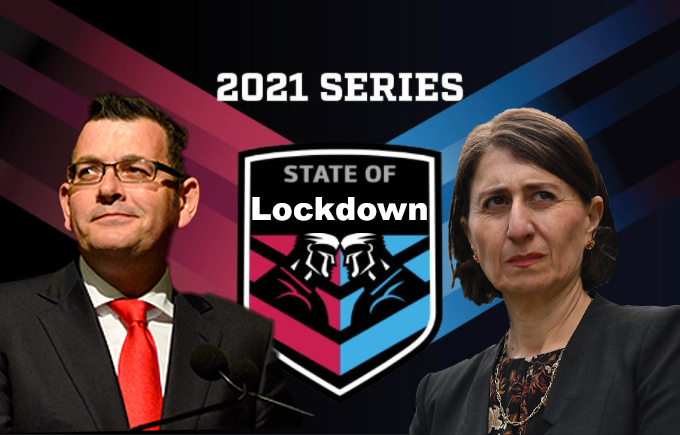 By Tyler Hamilton and John Delmenico

Another big week for Lockdown fans after yet another nail-biting round of ‘State of Lockdown’ has come to an end. While many fans and hospital workers were still reeling from the previous contest, it seems luck finally ran out for the lucky country as the next round kicked off.

An early start for team NSW lead by Gold-Standard Gladys caused immediate concern for reigning champions VIC once again lead by Danger Dan after returning from a back injury. NSW started by spreading the virus around the field faster than any regular defence could manage. With their risky yet confusing early plays and a new strategy dubbed ‘Stay-at-home Order’, NSW seemed almost certain to be heading past the line first.

However that is not to say VIC didn’t have it’s shining moments early, including a quick pull on the ‘shut borders’ play left NSW unprepared and even seemed to hurt ACT on the sidelines. However NSW’s historic virus passing skills somehow managed to stay out of VIC’s grasp enough for Andrews to not be able to set up a proper play for Lockdown, leading to a nil-all draw going into half time.

The half-time break lead both teams hearing concerning pressers with a surprising amount of focus on the leaders’ clothing. With entertainment by the comedian Scott Morrison allowed for a distraction from the real leaders with some classic slap-stick baboonery.

The second half is where the game really kicked off, especially between the two Captains who even in previous series have kept a respectful composure but this time went directly at each other.

NSW again with the virus continued to apply the pressure on it’s people for what all up went for around a month of complete ownership of the virus. With some excellent performances by over-zealous police who essentially locked down the poor neighbourhoods and an amazing push to spread the virus from the team’s Dragons players, the team was able to get some points on the board. However they did fail to convert the full lockdown after leaving many stores open.

As the clock wound down, seemingly out of no-where Dan put that fixed backbone into use and carried the state into lockdown, with barely even a signal to his team what was going on. With his skill at immediately converting covid into a full lockdown, he was able to take a victory here today.

Experts say what let NSW down was a complete failure to understand the ‘essentials’ and a failure to communicate effectively by Gladys and the rest of the NSW leaders.