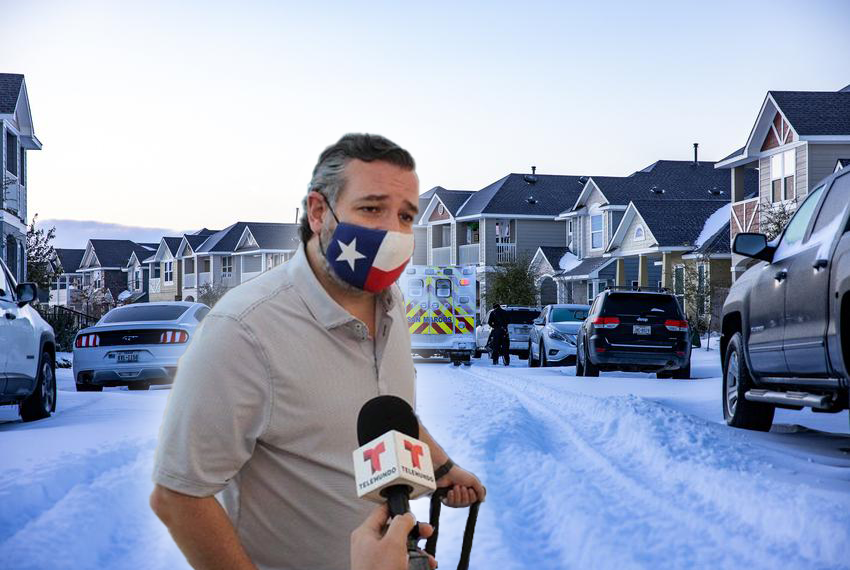 OPINION: Another day another fake outrage by the cancel culture brigade as they decided to CANCEL Senator in the front, partier in the back, Ted Cruz’s holiday to Cancun due to some goddam snowflakes!

I am sick of this PC nonsense, why must he suffer because of these snowflakes! The leftist elites wont stop complaining about how people are dying, but they selfishly didn’t even consider that maybe Ted Cruz heroically was dying for a margarita in the sun! This is America isn’t it? If a regular guy wants to take a private jet to get a bit of relaxation and get their mind off the children freezing to death, that is their right!

What is Ted Cruz supposed to do anyway? When Trump insulted his wife, he heroically didn’t do anything. When Trump accused his dad of murdering JFK, he heroically didn’t do anything. What else was Ted Cruz expected to do in this situation? Stand up for his state? That isn’t in his nature. I thought leftists were meant to be accepting and tolerant of who people are, yet they won’t tolerate Ted Cruz for who he is? What a joke!

This is Texas for crying out loud, if Texans are strong enough to vote for a leader who they thought was doing a terrible job, they are strong enough to fight the cold. The lamestream media is calling for leadership, but Ted Cruz took initiative and took him and his family to safety! Is that what the leftists want, dead families? Isn’t that why they claim they are against our guns?

Trust me, when all this is over and the dust settles on the whole ‘why did you cut the funding to the maintenance designed to protect the power plants and batteries during a snowstorm,” thing will have blown over and Texans will be happy they cut that funding. Anyway I thought leftists were all about climate change, but now they want to heat their homes? HYPOCRITES!

Texans lets stand by our boy Ted Cruz, grab your guns, get in your trucks, and let’s show those snowflakes what ‘Merica is all about! USA, USA, USA!