World
It’s fine to laugh about this one, Pope confirms
October 2, 2020 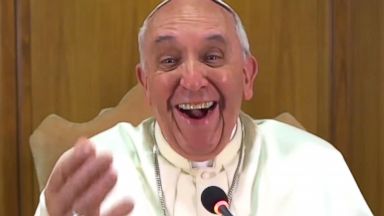 Trump getting coronavirus is very, very funny, the Pope has confirmed. Experts in areas such as philosophy, health, morality and history have all confirmed that not only is it fine to laugh about, but that we have a moral obligation to do it.

“It couldn’t happen to a bigger cunt” said Pope Francis, spitting his water all over the place. “I’ve been chuckling to myself ever since and if you’re not doing the same there is probably something wrong with you.”

“You can’t write stuff like this,” confirmed UN Secretary-General, António Guterres. “If you don’t laugh about it now you’ll only be annoyed with yourself later. That’s what I reckon, anyway.

“You’ve got to ask yourself – would Donald Trump care if I got coronavirus? The answer is, of course, ‘no’, so go for your life,” said noted Hindu leader Swami Smaranananda.

Vindication has also come from those close to the Trump administration. Shaking his head and laughing, immunologist Dr Stephen Fauci said “This dumb bastard!” before opening a bottle of expensive wine and lighting a cigar.