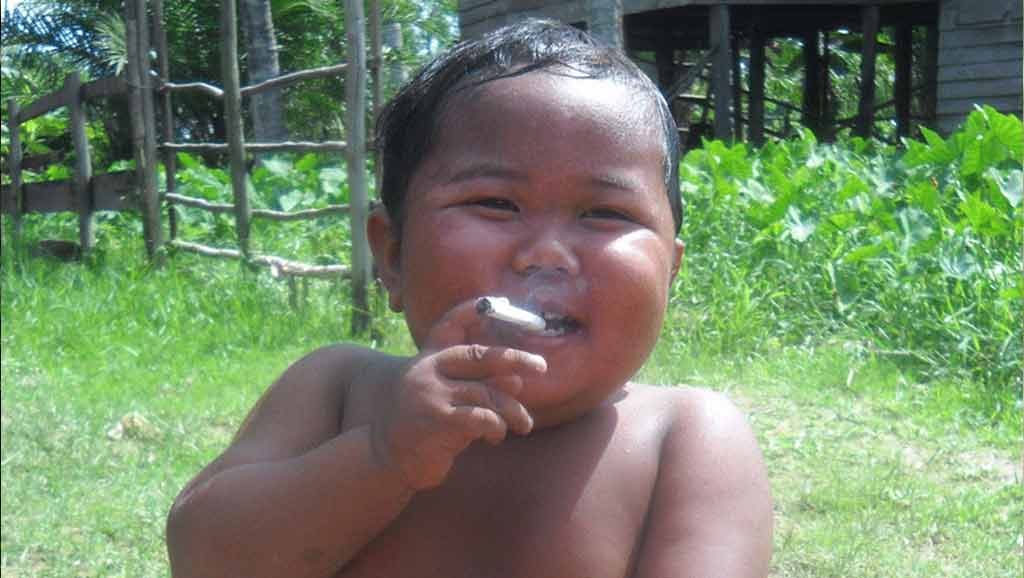 A two-year-old Indonesian boy, Ardi Rizal, made headlines around the world when it was revealed that he smoked up to 40 cigarettes a day. But it’s now been revealed that the child has not cut out his cigarette consumption, only his willingness to pay for them.

Fellow toddler Santoso Asegaff has revealed that whenever the pair are in daycare together, chubby Ardi will ask him for a cigarette. “He made a big show of having given up for the media, but I’ve lost count of how many times he’s hit one of us up for a ciggie the moment they let us play outside,” whined Santoso, stamping his feet. “And if I tell him to just go buy a packet, he says he doesn’t smoke anymore!”

Asegaff says that the only time Rizal ever stops hassling his classmates for a smoke is if he discovers they only smoke menthols.

But Rizal says that not buying cigarettes have been crucial to his attempts to quit. “I’ve tried everything,” said the young addict, vigorously chewing on several Nicorette sticks and a jelly snake. “At first I’d only have one after each breast feed. Then I switched to rollies. Then I tried hiding the pack from myself in an old toy I don’t play with anymore. But nothing worked,” he said. “At least this way I’m cutting down a little bit – and saving money.”

Four-year-old Lastri says she doesn’t mind giving Ardi the odd smoke, as long as she can play with his toys. “The doctors were trying to stop his smoking by giving him stuff to play with,” said the packing-a-day girl. “I really like the Etch-o-Sketch he got so, if he lets me play with it, he can scab as many darts as he wants.”

Carers at Ardi’s crèche say examples like this are helping the children learn how to get along. “The smoking laws in this country are very lax, many children smoke,” says Bambang Day Care Centre Manager Setiawan Alatas, lighting another cigarette off the end of his last one. “Big tobacco companies are making a fortune exploiting the situation here, so I say why not turn it to our advantage. If the children can learn about sharing through bludging the odd dart, why not?

But Asegaff says he has had enough. “Yesterday I told Ardi I only had one smoke left in the pack. Then I lit up and he asked me for a drag! That’s when I pushed him off the swing.”

Rizal now claims that he only ever smokes socially, and could give it up tomorrow if he really wanted to.