loading...
World
Trump forced to ride out twitter ban by reorganising his top friends on MySpace
1st of your 1,000,000 free articles this month 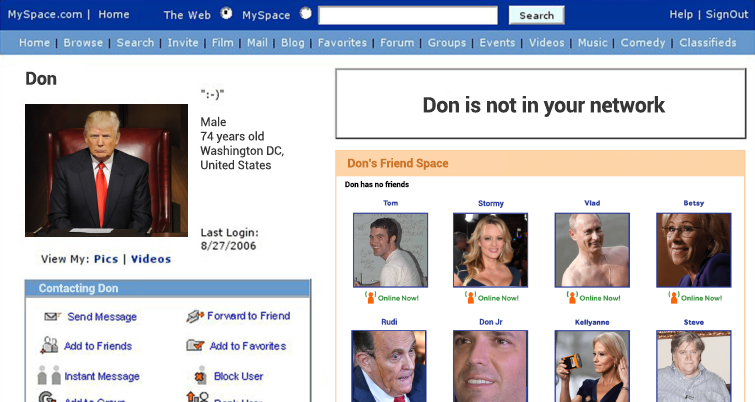 Former Reality TV host and full time golfer Donald Trump has today re-logged into his old MySpace account for the first time in 10 years after being banned by Twitter and Facebook for 12 hours for attempting to overthrow the American elections. “That should show him,” said Mark Zuckerberg last night, implementing the bare minimum punishment. “Fake news problem solved, now it’s back to molesting children for me.”

Instead of his usual Tweets, Trump has instead been forced to vent his conspiracy laden thought-bubbles on less traditional platforms, like Bebo, MySpace, and on the walls of the White House urinals. “Biden suckz, Trump 4 Evr” Trump wrote on into the resolute desk with his favorite weather-altering-sharpie this afternoon while watching congress confirm Biden’s victory. “D Trump ruls.”

Trump has also spent the evening reorganising his top 10 friends list on MySpace, a particularly difficult task given he has no real friends. “Pence is now at 11, that’ll show him,” muttered Trump as thousands of his citizens died from the pandemic and the Capitol was shut down by rioters. “Hmm, also I think I’ll move up Donald Trump Jr. to number 3. I don’t know why but I just like his name.”