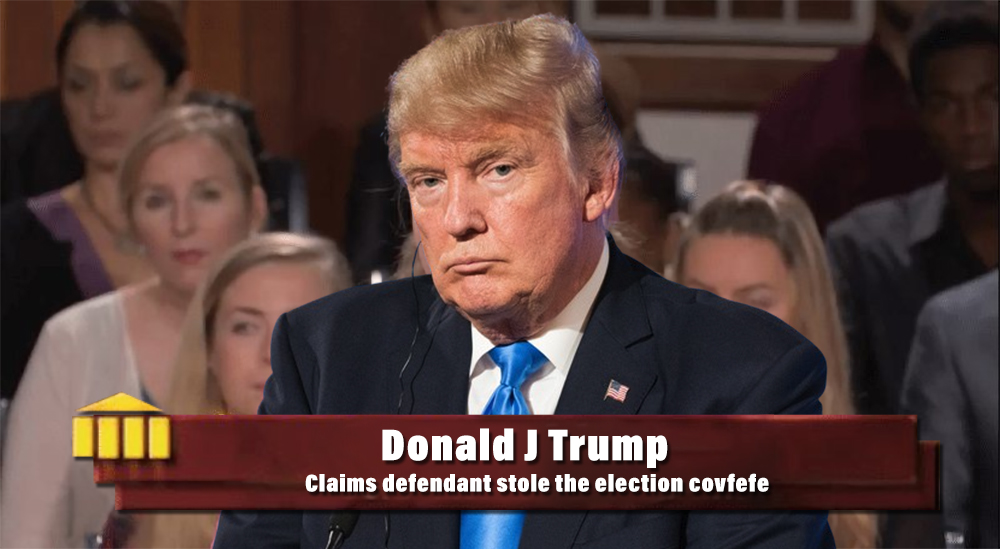 Broke loser Donald Trump has today announced he will continue pursuing his fight against being evicted from government housing, by taking the case to the ‘highest court in the land’, in a special crossover episode of Judge Judy. The decision to take the suit to Judge Judy for small claims arbitration was reportedly Trump’s himself, who says Judge Judy is the most qualified Judge he’s ever seen on TV.

A transcript of the episode has already leaked online:

Announcer: Welcome to an extra special episode of Judge Judy featuring some truly shocking turns including alleged secret emails, racism, violent threats, fraud, tax evasion and even some incest. The cases are real. The rulings are final. This is Judge Judy.

Announcer: Plaintiff Donald J Trump is suing his former employer, Democracy, for alleged slander surrounding claims he lost the US election, the unlawful eviction of him and his family without the real paperwork, as well as allegedly stealing his election. He is also suing fluorescent lights for making him look orange, President Obama for being born in Kenya, his golf course for making him play over par with corrupt golf clubs, the Fox News host that called Arizona for Biden, his mother for only giving him two scoops of ice-cream instead of three when he was five years old, China for not telling him that the virus they closed their country for was dangerous, middle class women for not liking him, and his own hair for making him look like an idiot.

Judge Judy: Mr Donald, it is your claim that the defendant owes you for evicting him from the ‘White House’, is that correct?

Donald J Trump: Democracy teamed up with sleepy Joe to attack me and my family, it was very rude. People are saying, very very smart people, and you know many of them, they say to me, and you know I went to a very good school, very good school, top in the country, Biden did too but you know when you’re a liberal they’ll let anyone in, but they did a number, oh you should have heard them, when they heard someone like me, good background, very nice family, but not from the right side of town you know, but I did very well, ask anyone, top of my class…

Judge Judy: No No No, No No NO! Enough! Stop talking and answer my question! Do you understand, or are you too stupid to understand how this works? This isn’t an audition! The show isn’t about you, this is my show!

Trump: That does it, I’m suing Judge Judy. Someone get my lawyer. Where’s Rudi? What do you mean he’s at Judy’s Gardening Emporium!?