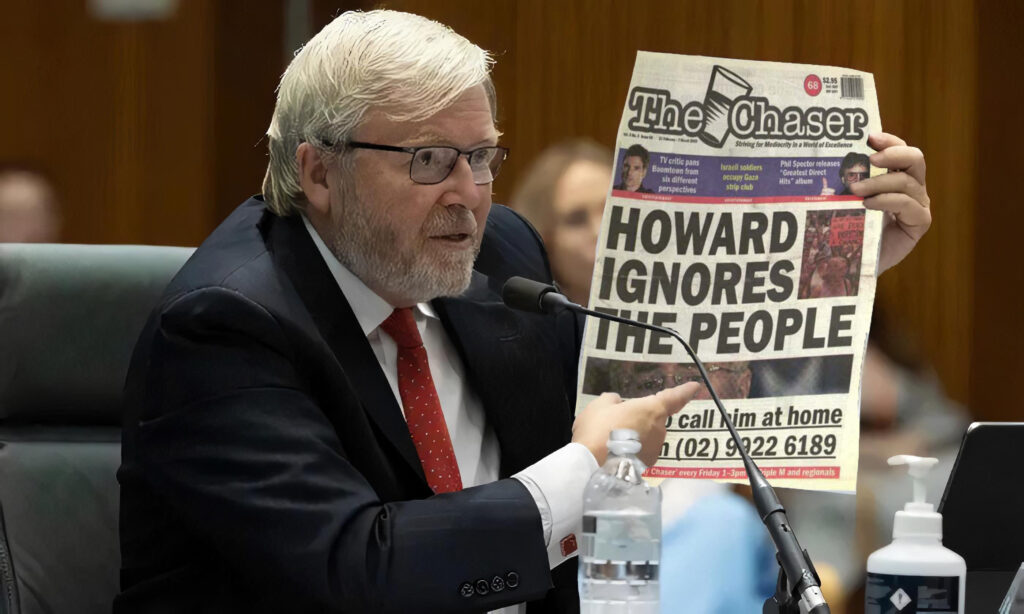 The Chaser’s recent surge as Australia’s most popular news site on Facebook has raised some eyebrows in the parliamentary inquiry into media diversity. Former Prime Minister, Kevin Rudd, warned of the group’s rising influence and terrifying ability to hold politicians accountable.

“From the War on Everything to their annoying daily headlines, to that terrible Election Desk series, the choke hold they have on our democracy is frightening” Rudd said. “To them nothing is sacred, not even the serious lack of traffic updates on the M1.”

The recent action by Facebook to ban Australia’s news media saw the loosely factual reporting of the Chaser dominate Australian newsfeeds. “I don’t see what’s wrong,” said Chaser representative Charles Firth. “It’s not like we are telling any more facts than say Newscorp.”

Speaking in a video on Facebook after the hearing, the former Prime Minister further stated “It’s time we rid ourselves of this cancer on democracy. They have been publishing for far too long. I frankly don’t know how they managed to stay as relevant as I have.”

Asked whether this was just an attempt to get back at The Chaser for all the times they chased him down the street in a chicken suit, Rudd replied “Oh, would you look at the time. Gotta zip! K-Rudd out.”